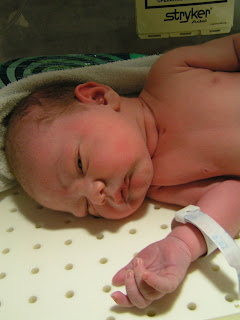 Welcome to the world, Jack!

Mom and Baby are doing great and resting comfortably. Jack decided to arrive with a bullet (and a scare to his folks). His cord was wrapped around his head twice and tightly, so he was as purple as his ancestors getting ready to take on a British drunk in a Galway bar.

But given some good doctors and nurses, some oxygen and he turned the corner quickly. Thanks again to Kootenai Medical Center for a job well done!

Though he was a day late based on the first due date given, he was way early by Kennedy baby standards. And that's a blessing - Mom was quite ready.

Since this is our sixth child born at Kootenai Medical Center, we have all the holes punched on our "Frequent Delivery" card, so we can now get a free latte!
Posted by Mike Kennedy at 9:30 PM 1 comment:

I was alerted to this series that will be airing beginning in January by a former professor of mine, Joe Kobylka of SMU in Dallas, Texas. As a nationally known and respected expert on the Supreme Court in general and the late Justice Harry Blackmun in particular, he will be featured in the series. In watching excerpts of the show's episode 4 here, it looks to be a terrific series for history and government buffs, particularly if you're interested in the Supreme Court.

I had Professor Kobylka for class my first semester freshman year and my last semester senior year, and he was also a valued counselor for class slection and the like. As I recall, I received the same grade in his classes both of these bookend semesters of my college career, and suffice it to say it wasn't an "A". Because we shared an avid love for baseball and a certain northern wisecracking approach to the socialite scene in Dallas, I don't hold any grudges against him for my grades.

Considering, too, that I took Adam Smith's 'laissez-faire' approach to a few aspects of my college career, he might even have been more generous than was deserved.

I should note however that a google-assisted discovery of Joe Kobylka's inclusion on a 2003 student newspaper list of SMU's Best Dressed Faculty Members shows that MUCH has to have changed in Dallas fashion trends and student tolerance of Wisconsin-chic sartorial style since I attended college there.

The Supreme Court series will be a must-watch for me, hopefully you'll find the time as well.
Posted by Mike Kennedy at 7:42 PM No comments: