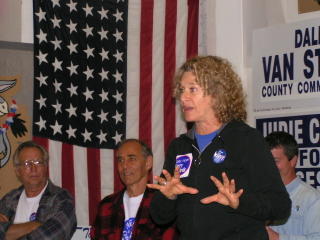 Earlier this month Carole King released an album of music recorded during live concerts on her "Living Room Tour" last year. As a lifelong fan I was ecstatic to hear her music, but I also had the wonderful opportunity to get to know and travel with Carole last year while she packed auditoriums, halls, and living rooms all around Idaho.

Carole is pictured here during an appearance at the Bonner County Fair in Sandpoint in August of 2004. As a result of our travels together I'm proud to call her a friend.

Carole's passion and love for Idaho and America are complete and total, and her new album is a special gift that I'm glad she's given all of us. It's also a musical history lesson as she dives into a medley of outright classics that she's written over the years - every one of which all of us know.

No surprise, but Carole is once again on the Billboard charts with this album, hitting the Top 20 this last week after only two weeks of release!

Thanks, Carole, for making Idaho proud with another terrific album!

Carole King's Website
Posted by Mike Kennedy at 2:30 AM 7 comments: 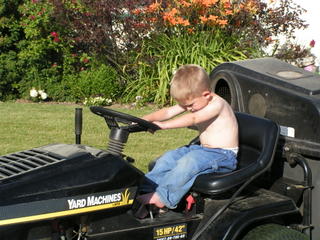 Not really, but he did contemplate the engine as it sat idle in the yard.
Posted by Mike Kennedy at 3:36 PM 1 comment:

Deanna Goodlander is a two-term council member and shouldn't have any trouble getting reelected.

Coeur d'Alene Press: "...Local software businessman Mike Kennedy said he is strongly considering running for Wolfinger's position, but will probably have to rent an apartment in city limits until construction on his new home is finished. His present home is just outside city limits. "
Posted by Mike Kennedy at 12:08 PM No comments: 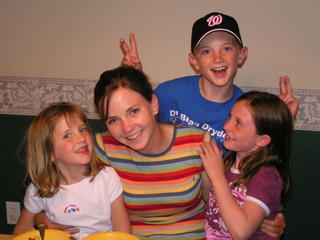 Mark my word - you'll be reading about Kathleen's cousin Madeleine on the LPGA tour one day!

Golf Plus - The Idaho Statesman - Always Idaho: "Meridian's Marc Arima survived a second-day charge from Jake Harr of Buhl to win the boys title, while Madeleine Sheils of Boise captured the girls crown Wednesday at the Big I Junior Golf Classic qualifier at Shadow Valley Golf Course."
Posted by Mike Kennedy at 10:44 AM 1 comment:

This is responding to a question on the Huckleberries Online blog about the location of the new library.

The land where the library will be built was partially donated (courtesy of the Jameson family), partially purchased with LCDC involvement, and adjacent to the City Hall, which was a strategic placement. Again, I'm not sure of all the exact reasons for the initial location there, but during the campaign we talked about a few key reasons why the location was a good one:

(2) the demographics of the area and the schools nearby indicate that many of the city's most economically disadvantaged kids live in or near downtown, thus it would serve those people who need it the most (surprisingly, CdA has nearly half of it's children in SD271 on free or reduced lunch, an anti-poverty program);

(3) putting a library there could preserve public space for the entire community as opposed to the alternative, selling to the highest bidder and getting another high-rise to ring McEuen Field - I felt this to be a worthy goal philosophically;

(4) the land had already been secured, and with the sale of the current library building on Harrison and passage of the bond, the citizens would be bonding for less than half of the cost and value of the new library - with real estate costs the way they are finding new property would be tricky, and if the location were outside the LCDC zone the LCDC couldn't be involved and the advantageous funding structure there could make the entire cost of the project much higher;

(5) while growth is occurring in the North for sure (that's where I live) some visionary planners have told me that long term growth in this city - which is coming whether we like it or not - will likely be to the south and east, thus making the location perhaps more centrally located looking into the future; and

(6) lastly, there will be tons of new parking spaces in the new library (and theoretically the City Hall complex area next door) and downtown always needs more parking!

I discovered that arguing the location was like arguing religion - it was a matter of personal opinion and thus no one could ever truly be "right" (and the best assessment of the decision-making wouldn't occur until well into the future after the project is completed).

There are still efforts ongoing to raise the final amount of money for completing the project, fixtures, etc, and the city has a good team together working on it, led by Renata McLeod. There are great naming opportunities and ways to put your family's permanent stamp on the new library through tax-deductible contributions.

For more information, or to make a contribution, go to the link above or here: www.NewCDALibrary.com
Posted by Mike Kennedy at 6:04 AM No comments:

Look at that - great national recognition for Idaho! Let's hope we don't have to test this.

KTVB.COM | Idaho News Weather & Sports | Local News: "COEUR D'ALENE -- A national group says if bioterrorism, infectious disease or any other disaster strikes, the best place to be is Idaho.

The National Association of County and City Health Officials has recognized Idaho as the best-prepared state in the nation to respond to health emergencies. "
Posted by Mike Kennedy at 8:11 PM No comments: 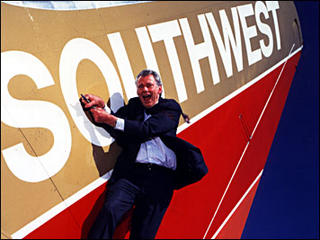 Southwest Airlines is one of the best companies in America. I've been a fan since I started flying them in Texas, and their service and on-time reliability continue to be stellar. There are lots of folks who don't like the "cattle" feel of a Southwest flight, but I think they are efficient as can be and I'd trade lots of perks for low cost and on-time service. Face it - there are no perks on any airlines anymore, so Southwest just does what everyone else does way better and with more fun. Herb Kelleher has always been a business hero of mine.

This is sort of disturbing, as we rode this exact ride with our 9 year old and 7 year old last December. It was a scary ride, but something tells me there had to be something else going on with this young girl health-wise.

local6.com - News - Girl Critical After Riding Disney's 'Tower Of Terror' Ride: "A 16-year-old girl is in critical condition after riding the 'Twilight Zone Tower Of Terror' ride at Disney-MGM Studios at Walt Disney World, according to Local 6 News. Officials said a girl from Britain exited the ride Tuesday at about 9:50 a.m. and complained that she was not feeling well, Local 6 News reported."
Posted by Mike Kennedy at 11:47 AM 3 comments: 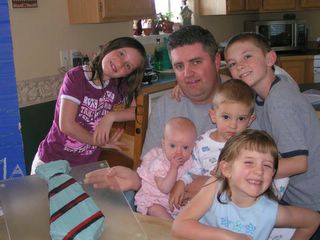 This shouldn't be a surprise, but the rank smear of this bad act should be punished. Maxwell has long been known as a bomb-thrower, but this was over the top even for him. Chuck Winder didn't deserve this, and though I think the right guy ultimately won the election (Mayor Dave Bieter, whom Maxwell also opposed), this was unseemly. Look next for Chuck Winder to file a civil suit against Maxwell - I think it would have some traction. Perhaps we're hearing the last dying days of Maxwell's organization?


KTVB.COM | Idaho News Weather & Sports | Top Stories: "We now know who was responsible for the Boise mayoral smear campaign in 2003.
Laird Maxwell, a conservative activist and lobby, filed an affidavit in a Boise court Thursday claiming he acted alone. "
Posted by Mike Kennedy at 9:27 PM No comments: