Another Shot of Crash 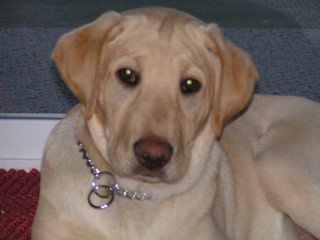 Posted by Mike Kennedy at 6:37 PM No comments:

New Addition to the Kennedy Family 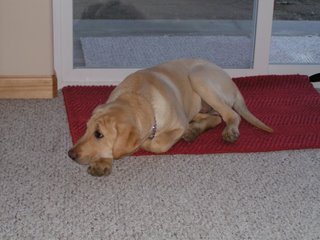 Looks sad in this picture, but really he's only tired, having been worked over like, well, like a dog, by the kids.
Posted by Mike Kennedy at 6:32 PM 6 comments:

Madame Mayor I wanted to talk just a little bit about a few things that happened last week in Coeur d’Alene. I don’t have a motion to introduce, but rather just a few brief comments and a request for some more feedback both here and in the larger community. Councilman McEvers has made mention of the need to try to spur more discussion on some issues facing the city without always having to have a vote on a specific measure, and I agree with him.

P&Z was handling two items on their calendar that caught my eye:
1) A request for variance to increase the height on a building on Sherman Avenue that would provide as I understand it 6 new residential units; and
2) A proposed zoning change from agricultural to city residential for annexation which facilitated a preliminary plat request for 867 new units on the prairie.

As the minutes of the P&Z meeting will attest, a number of people spoke against the 6-residential unit proposal downtown and the P&Z commissioners voted the variance down.

Later, though, not one person spoke in opposition to the annexation of the potential 867 residential new units on the prairie.

All the while, the returns were coming in indicating that the voters pretty soundly rejected a new school levy to deal with overcrowding and maintenance of old building issues in the district.

Certainly many folks have varying opinions on why the levy went down, but everyone I talk to seems to at least agree that increasing property taxes and a feeling that “new growth” should be paying for the impact on schools contributed to the levy’s defeat.

But as I read the papers the next day and read the outcome of the P&Z hearing, I couldn’t help but feel that there is a pretty serious disconnect in our community when residents clearly vote down a school levy on the very same day that an 867-unit plat annexation is being unanimously approved by the Planning and Zoning Commission with no discussion or input from residents at all.

No one has all the answers to the complex issue of managing growth effectively – I certainly don’t.

I recognize that currently the school districts cannot charge impact fees at all on new growth, so the burden falls heavily on property taxpayers. I recognize that P&Z has strict rules on what issues they can factor in when making a decision to approve or reject an annexation request. And I recognize that some folks don’t want any new heights downtown while others are very nervous about any new ordinances dealing with height and downtown development in Coeur d’Alene.

I knocked on about 1700 doors during last fall’s campaign, and when I asked regular residents an open ended question about what concerned them most about the community, to a person they talked about growth, taxes, and the changing nature of Coeur d’Alene and Kootenai County.

Last week it felt to me like all three of those issues came to a head on the same day. And for lack of a better word it seemed almost schizophrenic to see two competing messages being delivered on the same day in the same city.

Citizens do look to us here, as well as to the School District, the County Commissioners and State Legislators for leadership. So I felt it was important to speak up when I saw this clear paradox in real time, and try to get some input from residents and other elected officials as to how we feel our way forward, trying to manage growth effectively while not choking off any economic expansion or opportunities.

In short, I want to hear what voters and residents are saying and I want to rely on the expertise of folks like the Planning Commissioners as well. But what concerns me is that we appear to be getting, or maybe delivering, two conflicting messages.

So on that note folks may not be prepared to have a longer discussion about it tonight, but I would like to open a discussion about the general issue of growth and how to manage it both with my fellow councilmembers, and with citizens directly. I’m all ears, and I invite people watching to contact me or any of our city councilmembers with input, thoughts, or concerns. I can be reached on my city email address at mkennedy@cdaid.org or by calling me at 664-7976.

Thank you, Madame Mayor for the time to speak.
Posted by Mike Kennedy at 1:31 PM 1 comment:

This winter, Idaho saw the price of gasoline reach nearly $3.00 per gallon, and you were not alone if you needed to sit down before you opened your utility bills recently. We have been cautioned to look into alternative energy and fuels for quite some time. The time is upon us now. Every household and pocket book is feeling the pinch of our heavy reliance upon foreign oil and diminishing fossil fuels. The Idaho Legislature is waking up to the needs and the opportunities that exist in alternative energy and fuels as well.

This week a House Committee agreed to form a study committee to spend the summer researching the opportunities and possible pitfalls in implementing a mandate for adding ethanol to gasoline. My motion in a Senate Committee sent a 2% Bio-Diesel mandate to the floor for amendment. I predict this bill will end up in the summer study committee. I also predict that we will send the coal fired electric generating plant proposals to this study committee as well. This committee will be charged with developing a statewide energy plan. This plan will identify our future energy needs as well as where we should look for that energy. This effort will set the stage for the future of energy development in Idaho and Idahoans will be able to help shape that development. I support these efforts to develop alternative fuel and energy industries in Idaho.

In Idaho, we have ample resources (not fossil fuel based) that should also be implemented as a part of that plan. For example, there are enough wind resources in Idaho to provide for the entirety of our electrical energy needs. Wind and solar energy do fluctuate and hence cannot be counted on to serve a base load, or a constant source of energy. However, with natural gas fired plants to provide for peak needs in the coldest and hottest months and hydro to provide the base load, it is incumbent upon us to look to wind and solar energy as a way out of our dependence on fossil fuels.

I am intrigued with the idea of bio-diesel and ethanol to serve our motor fuel needs and lessen our dependence on foreign oil. These alternative fuels can be produced with the crops we grow, as well as with some of the waste products from food processing. While both fuels have some challenges, we must as a nation focus our efforts on developing these alternatives. I have been exploring the opportunity to develop a co-op of producers where farmers could use canola as a rotation crop and grow their own bio-diesel fuel, which could provide fuel for their own operations. As an ancillary benefit, this rotation might provide for the diversion of acres to help firm up pricing in crops such as potatoes.

Clearly, if we are to reach some sort of energy independence, we must encourage development of solar, wind, geothermal, small hydro, ethanol and bio-diesel. These resources should all be integrated into Idaho's plan. The debate about locating the Sempra coal-burning plant has helped Idaho focus on the need to develop alternative energy within our borders. We must develop our ample resources. The planning is long overdue and I encourage all Idahoans to weigh-in with their opinion. This energy plan will set the stage for the next generation of Idahoans. It will determine the movement toward renewable clean energy or coal fired electrical generation plants. I believe that Idaho has a bright future in developing clean alternative energy solutions.

Quite the revelry in the Kennedy home this week as Max has taken to his potty training with a vengeance. You probably can't remember the last time anyone cheered when you went number one or two in the right place (i.e. not your pants) but Max has been getting constant cheers all week from his brother and sisters. Dinner the other night had the crowd chanting "Way to go, Max, way to go!!" in the rhythm you'd hear at a World Series game.

It's interesting, because we decided this weekend that it was just flat time for him to get going on this project, and sure enough he has responded amazingly well. As always Mrs. Kennedy gets most of the credit, since she spent the patient time with him in the bathroom getting acquainted with the procedures.

So there you have it - whatever else is going on in the grown-up stressful life zone, Max is digging getting cheered while he's on the toilet.

Nice work if you can get it.
Posted by Mike Kennedy at 11:22 AM No comments:

Kudos to John and Ann Beutler 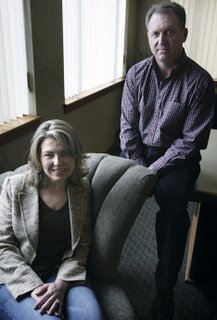 COEUR d'ALENE -- The Coeur d'Alene Public Library and the Salvation Army Kroc Center are both $100,000 closer to their goals thanks to a generous gift this week from John and Ann Beutler.

Ann has lived in Coeur d'Alene her entire life, and John moved here in 1975 from Clarkston, Wash., after graduating from Washington State University. Their objective with the big gifts: Give back to the community that has given so much to them.

"I remember going to the library when I was a kid all the time when it was at what's now the Harris-Dean Insurance building at Seventh and Lakeside," Ann Beutler said. "I'm sure this library will be very different, but we'd like to be able to have good opportunities for the kids of this community."

Read more here.
Posted by Mike Kennedy at 12:31 AM No comments: 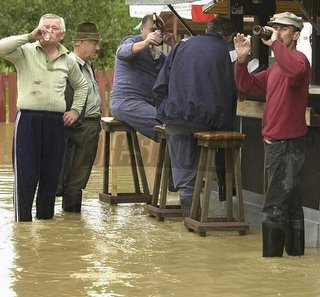 Posted by Mike Kennedy at 11:23 PM No comments: