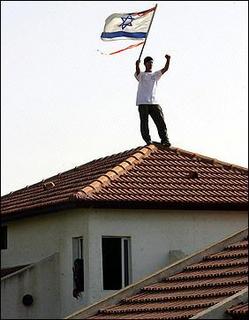 
I think this is a truly momentous occasion - one that makes you stop and pause and reflect on just how much pain and suffering that people in the Middle East have put one another and themselves through over the years. I am no fan of Ariel Sharon, but I think he has to get credit for following through on this extremely difficult action in hopes of continuing a peace process that is as tortured as anything one could conjure up.

Certainly there are strategic reasons for this move on the part of the Israelis, but I have to believe it will be met there with contemplation of what the future of the region really is.

Pullout of the Gaza Strip: "Backed by bulldozers, Israeli forces fanned out through the Mediterranean seafront territory, marching through makeshift barricades into a string of settlements after hundreds of families defied a midnight deadline to leave voluntarily.

As smoke rose from tyres set ablaze by protestors, emotions were running high with sporadic scuffles breaking out while settlers and soldiers wept tears of rage and anguish at the historic operation that pitted Jew against Jew.

Sharon, who risked his political career on the pullout and has been vilified by settlers who once considered him their champion, said he had been moved to tears seeing Jews being hauled from their homes.