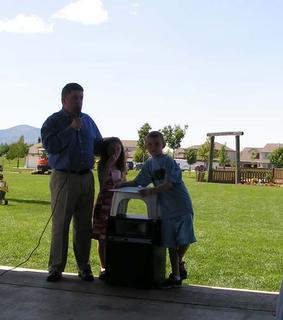 When I moved to Coeur d’Alene in 1991 I had all my belongings in the back of my 1984 Honda and no money. So I spent several months living in the basement of my aunt and uncle’s home in the Fort Grounds – a great introduction to my new hometown.

But the most important item in my resume now is that fourteen years after arriving in Coeur d’Alene I have a beautiful wife and five amazing children all born in the same wing of Kootenai Medical Center right here in Coeur d’Alene.

The reason I’m running for City Council is because of those five kids. Kathleen and I are living the “American Dream” here, and we want our kids to be able to do the same – to get a job, buy a home and raise their families right here, just like we’re trying to do.

There are three issues that I think are critical to preserving and improving our quality of life in Coeur d’Alene:
• Growing in a way that makes sense
• Protecting our kids
• Preserving access to open space and public places

I’m sure you’ve all heard the line: “It was the best of times it was the worst of times.”

These are the first words written by Charles Dickens in his classic novel A Tale of Two Cities. They described Paris and London in the 1770’s, but in many ways those words could address Boomtown Coeur d’Alene in the early 2000’s.

I want to talk for just a few minutes about our two cities.

Growth and development are here – and they bring great opportunity along with challenges and change. Recently a consultant came to town and told our city officials that CDA was standing in the path of a freight train and we didn’t realize it.

One city of Coeur d’Alene is bursting with new residences, increasing home values, and new construction everywhere, providing a vibrant and robust economy. We absolutely need to keep this economy strong to provide livable wage jobs for our citizens. But our other city has a widow in the same home she’s been in for years, now living in fear of losing her home to increasing property taxes. Our city also has too few livable wage jobs for our neighbors.

So ask yourself if Coeur d’Alene is growing in a way that makes sense. In many cases it’s not. Here’s an example – garbage fees, water fees, wastewater treatment fees – all of these have gone up over the years. But since the early 1980’s annexation fees have not increased at all.
Growth must pay for itself - and it isn’t now. We must enact more aggressive and more targeted impact fees so that new construction underwrites the cost of the new infrastructure needed to support it.

New development should also be good for all the community. We’re standing in a terrific new neighborhood – Coeur d’Alene Place. We like it so much my wife and I chose to build a new home for our growing family a few blocks away so our kids could walk to the park, walk to school, and ride their bikes on safe pathways. We need to encourage developers like this who build with vision, and make any new development truly part of and good for the overall community, instead of just being a walled-off enclave with no connection to the area around it.

So we stand in a great neighborhood, but just up the road is a four way stop sign that forms an enormously long and overburdened line of cars every day at rush hour – a traffic jam of the type that so many people left cities to get away from. I want to know why that happens and what we can do to fix it. When it comes to the work of dealing with growth in Coeur d’Alene, I think we need to spend more time planning up front to ensure that we leave this town better than we found it and don’t make mistakes that aren’t fixable later on.

Young families like ours that are growing and making their way need a fresh voice on the Coeur d’Alene City Council.

Our one city of Coeur d’Alene provides good schools, great opportunities for kids to get involved and grow. The other city has challenges facing our kids that seem tougher than ever before.

Whether it’s a simple good quality of life issue like providing safe routes to schools, or a deadly serious issue like strengthening city ordinances so that violent sex offenders don’t gather together in makeshift flop-houses near our schools, we need to work harder to protect our kids.

Whether it’s ensuring that our community provides more after school programs or the need to keep cracking down on meth labs and the drug scourge in our neighborhoods, we need to work harder to protect our kids.

I want to be the voice for young families on the Coeur d’Alene City Council.

I am currently serving on the city’s Ad-Hoc Committee on Open Space. It’s a new committee, recently formed, and we’re doing our best. But the city needs to move faster and more aggressively to protect those precious open spaces that make our community something special but that are rapidly disappearing. Our one city of growth, opportunity, and excitement is rapidly threatening the other city of open western prairies, rugged mountains and hills, and pristine lakes.

We need to find a way to protect our access to places like Canfield Mountain, Best Hill, Sanders Beach, access to the lake and the Spokane River and we need to try to save some of the vanishing prairie from permanent loss, as our visionary neighbors did with Tubbs Hill many years ago. Time is not on our side here – we need to act now – creatively and innovatively – to protect our cities precious jewels. I don’t have all the funding answers for these challenges, but they are out there and we need to work hard to find them. And one more thing - when I’m on the council, I will do my best to ensure that McEuen Field remains public for all the people all the time and not turned over to private development.

I was proud to be asked to design and manage the campaign to finally build a new library in Coeur d’Alene through the passage of a bond. This was an important public space project. A great team was assembled, and we worked hard along with the fire and public safety folks, to talk to every community group that would have us in to speak. The city responded with overwhelming support – 68% - for the new library, despite some struggles and some opposition. It wasn’t easy, but it was worth it.

I want to bring that same leadership and creativity to the other challenges that face the city. The big things that are worth doing are sometimes very hard – I’m willing to roll up my sleeves and work harder and smarter to take on those big challenges.

In closing, I thank you all for coming out today in support of this campaign. I’m honored, flattered, and humbled. In return for your support I can promise you that no one will work harder than I will to listen, to learn, and educate myself on how to improve the city of Coeur d’Alene every day.

In order to accomplish the things we’ve talked about today – growing in a way that makes sense, protecting our kids, and protecting our open spaces, I have to ask you for one or all of the following three things – time, talent, and treasure.

Our campaign will need lots of volunteer help and time, we’ll need your great ideas and your talent, and unfortunately because campaigns aren’t free, if you’re able to help in the form of a campaign contribution – at any level – we need it and I will be most appreciative.

We started off talking about the two cities earlier – the best of times and the worst of times. In Coeur d’Alene we are in exciting and transitional times. I am very bullish on Coeur d’Alene’s future and I believe this is the best place in the world to live. I pledge every day to turn the challenges we spoke about today into opportunities and to ensure that Coeur d’Alene has nothing but good times ahead.

Very well said, Mike.
I wish you the best of campaign and the winning numbers on election night.

You pretty much covered it. These are the things we're losing, or need more of.

People worry so much about "development on the prairie," but if it's done correctly, and slowly, it can be an asset to the region.

My son listened to your speech, then came home and told my wife, "The man at the park wants to build more waterparks!"

Mike - I am sooo excited that you are running for city council. The city of CDA is very lucky to have such a competent candidate! Good luck.

If you are looking to change the look of your emails from plain white with black text to a colorful, eye-catching, attention grabbing email, OnLetterhead is the product for you. Go from "White" to "Wow" with one click!

With "OnLetterhead's "Ease of Send & Setup" (EOSS) technology, all the work is done before you type your message! Just click and send and see the results a branded difference can make.
**Marketing Strategies for the Future**