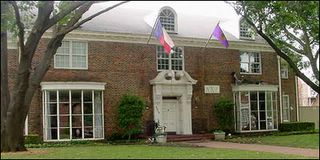 So the powers that be are tearing down our old fraternity house to make space for a parking garage (or something equally useful). This is probably a good thing, considering the condition of the place was awful when I lived in it 16 years ago. People on the SMU campus (Dallas, Texas) always knew what fraternity you were a member of because all us Lambda Chis had a distinctive smell that you couldn't ever get rid of. I remember a friend of mine whose mother cried when he came home from break because try as she might she couldn't get the smell out of his clothes.

The administration is apparently building a new Lambda house down the road, but it won't be the same. I suspect they won't spring for the beach volleyball court and basketball court outside, though they'll probably have the good sense this time to actually put up toilet stalls instead of just leaving the toilets sitting open next to one another. There was an unwritten rule, broken by very few, that if someone else were using one of the toilets you never went "co-pilot". RIP Lambda Chi House, and RIP rotten Lambda smell that no one could ever conquer. RIP Magic Carpet Ride and RIP consistently bad food.

We'll miss you, but not that much.
Posted by Mike Kennedy at 2:24 PM