So I'm sitting in a board meeting this afternoon in Boise, praying it will end on time (it didn't). And I missed personally calling big brother John on his birthday, though I know the kids called their beloved UNCLE JOHN! to wish him a big birthday this morning while I was traveling.

At the end of my business meeting of the Board of Directors of Catholic Charities of Idaho, the Bishop led us in the "June 24th prayer for St. John the Baptist". At the prayer's closing, I mentioned that today is my brother's birthday, and while I never had a clue that it was also the Feast of St. John the Baptist, I said "Bishop, I'm 100% sure that my mother knows whose Saint day it is!"

But no one can conjure up a much needed simple reflection on my part or speak to my moral compass more quickly and completely than brother John. And no one's approval or acceptance quite measures up to that of brother John.

We haven't lived in the same city approaching 15 years now, and life doesn't have us talking as frequently as we should. But when life hits the fan, there isn't a person alive that I'd be more comfortable calling to give me a nudge to where I need to be, whether its with a sardonic question or a knowing wisecrack, than my brother John.

Our kids are growing up in a home that is one block short of chaos at any time. But first-born Will shows more ability to carry the torch of leadership - with all that entails - each day. We don't want to put a major burden on him to be responsible for his younger siblings, but if he has any interest in learning what it means to be a world class big brother, he could do much worse than spend some time with Uncle John.

He couldn't have a better mentor. 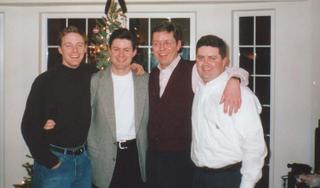