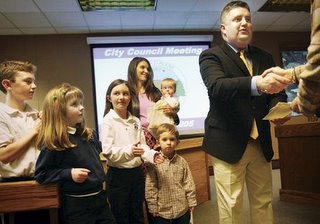 JASON HUNT/Press
Mike Kennedy, right, is joined by his family as he receives his certificate after being sworn in as the newest member of the Coeur d'Alene City Council on Tuesday. Family from left, Will, Maggie, Nora, wife Kathleen, Quinn, and Max.

"COEUR d'ALENE -- Tuesday's City Council meeting had very little on the agenda except for some very big changes.

"It has been a very fast five years," Wolfinger said. "It's been a wonderful experience. Mike's going to do a great job, and I am glad to be a resident."

(continued at link above)
Posted by Mike Kennedy at 11:21 PM

I read over your blog, and i found it inquisitive, you may find My Blog interesting. My blog is just about my day to day life, as a park ranger. So please Click Here To Read My Blog